Game 6 in the NBA 2018-19 finals takes place at the Oracle Arena gym. The reigning champion of Golden State Warriors had the opportunity to bring the score to 3-3 before playing the decisive match at the Toronto Raptors. But during the day, the handlers operate ineffectively, “Warrior” must see the opponent ascending the throne right on his home turf.

Seamless quality player of Raptors under the guidance of superstar Kawhi Leonard first crowned NBA championship. Canadians burst into emotion because of this championship, because after 72 years, the NBA championship (Larry O’Brien) left the US territory to hand a Canadian team.

In the decisive match, “Dinosaurs” defeated Warriors with the score 114-110. Toronto Raptors played well in the first 2 rounds when leading Warriors 60-57. Next, the home team brought the match to the starting line after the spectacular third half as usual. But the injury of the key handler Klay Thompson caused Warriors to collapse and fail in the final round.

In the first four games, Durant was absent because of injury. When the 30-year-old superstar returned in game 5, he only played for a few minutes, before recurring a serious injury. And Thompson was out in the third game. Curry and Green did everything at the end of the season, but not enough before the Raptors were both strong and hungry.

Leonard is the hero of the Raptors in the NBA finals this season. He scored an average of 28.5 points, 9.8 rebounds and 4.2 assists, with a successful finish of 43.4%. The former San Antonio Spurs star won the title of “Best Player” convincingly in the final series. Leonard is now honored by Canada as a hero.

After dominating the NBA with 3 championships for 4 years, the Warriors empire was overthrown in the NBA. 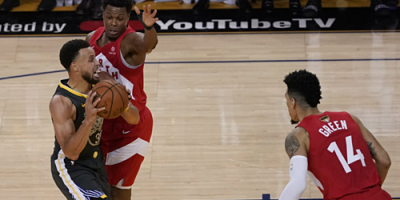